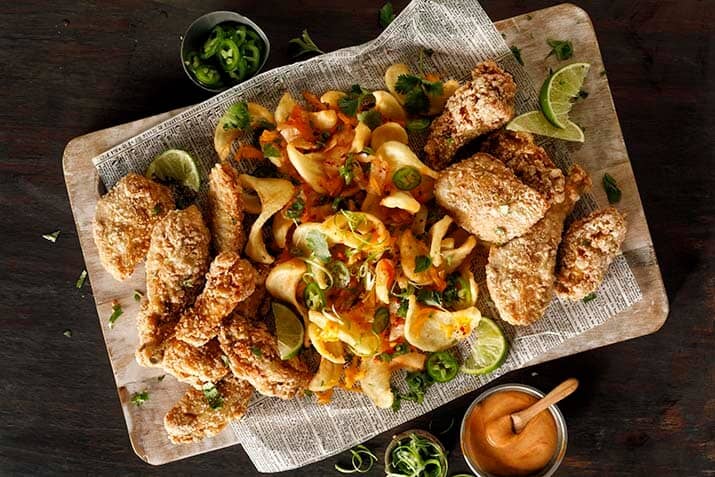 Chicken is one of the most popular proteins around, consumed by 33% of people worldwide.1 Chickens have had a wild ride. First found and domesticated in Southeast Asia, they were transported to Europe and Africa, then to the Americas. A relatively easy animal to grow, chicken is often less expensive than other proteins, adding to its universal appeal.

Fried chicken has had an equally wild ride across the globe. It’s hard to say who first fried chicken in fat to get a crispy exterior. There are historical accounts of this technique being used in the Middle East, China and Africa.

The modern American version of fried chicken, featuring a floured or battered exterior, was first documented in a British cookbook in the 1700s. The concept, brought to the Americas by the Scots, became popularized on the Southern table and ultimately the American version of fried chicken was created by enslaved Africans combining the spices from West Africa and the British battering technique.

Fast-forward to the 1960s as the industrialization of chicken farming and the rise of fast-food popularizes fried chicken across the globe. By this time, fried chicken has gone through several evolutions in different countries, with new battering, frying, and seasoning techniques.2

Simplot Corporate Executive Chef Michael Thrash has identified some of the cultural trends around chicken preparation that are growing in popularity here in the U.S. Here’s a little about each technique, what makes it unique, who’s doing it successfully, and a version from our very own Chef Thrash.

Thai-style Fried Chicken - or Hat Yai Gai Tod - is named after the city (Hat Yai) where it was popularized in southern Thailand. It’s usually found in street carts and traditionally served with sticky rice and fried crispy shallots. What makes Thai-style chicken distinctive is its use of flavors. The chicken is marinated in a condiment that has umami (by way of traditional fish sauce) and sweet (palm sugar), plus lots of Thai herbs and spices. To get its crunchy exterior, the marinated chicken is coated in rice flour before frying.

Thought to have been brought to Korea by American soldiers during the Korean War, Korean fried-chicken chains picked up steam in the 60’s and 70’s. The growth of KFC in the 70’s and 80’s popularized fried chicken even more. Korean-style fried chicken has since seen menu penetration more than double since 2016 in the U.S.3

One of the main distinguishing features of Korean-style fried chicken is the double-frying technique.4 Whether the chicken is dry-brined, marinated or wet brined, and whether the exterior coating is a batter or a flour coating, Korean fried chicken gets its ultra-crunchy texture from a double frying technique. By frying the chicken at a lower temperature for 10 minutes, letting it rest for a couple minutes and then frying it again at a higher temperature, the chicken flesh gets cooked through completely without burning the exterior. This is idea for fried chicken that’s going to be sauced, which is pretty typical in most styles of Korean fried chicken, like Yangnyeom chicken. Yangnyeom is usually made with a sauce that is sweet, spicy, and tangy.

This purveyor of Korean double-fried chicken was selected by Nation’s Restaurant News in 2020 as one of the “Top 10 Growing Restaurant Chains To Watch.” It has grown to more than 100 locations in the U.S. with its signature Korean sauce.

Peri peri, piri-piri, pili pili are all names for a similar style of South African roasted chicken, named for the Swahili word for chili pepper, pilipili. Peri peri sauce was first made by Portugese settlers in South Africa. The traditional peri peri chicken is marinated in a paste made with the peri peri chili pepper, which is similar to a bird’s eye chili. Recipes vary wildly from region to region and include different spices and herbs to create the seasoning and marinade. Though it’s a relatively little-known flavor profile in the U.S., (only 1% of the country familiar with peri peri sauce today), 56% of consumers say they would be interested in trying it.5

Founded in South Africa in 1997, Nando’s marinates their grilled chicken in peri peri sauce for a full 24 hours. Made from African Bird’s Eye chilis, Nando’s unique flavor is now available in 30+ countries, including the U.S.

Southern-style fried chicken is one of the most popular foods in the U.S. But with more consumers pursuing plant-based diets as a whole, plant-based alternatives to fried chicken are growing in popularity. Tofu and seitan are some of the more popular meat substitutes, but companies like Beyond Meat and JUST are finding other ways to replace chicken. In 2014, just 1% of the U.S. population identified as vegan. In 2017, that number jumped to 6%.6 With growing popularity, finding vegan alternatives to comfort food will only grow as well.

Chicken is so commonly eaten that it can be easy to dismiss it as a bland or neutral protein, but as the recipes above show us, there are countless ways to prepare chicken. And these regional specialties from around the globe have special appeal for younger generations with adventurous tastes.

“Millennials and Gen X are actively looking for new flavors,” says Chef Thrash. “Regional chicken dishes from around the world are catching on. With great flavors from Africa, Asia and South America, chicken is taking on new life.”

All of these different flavors can elevate chicken to delicious new heights. Try out the recipes above as written, or use them as inspiration for your next fried chicken creation. You won’t be disappointed. 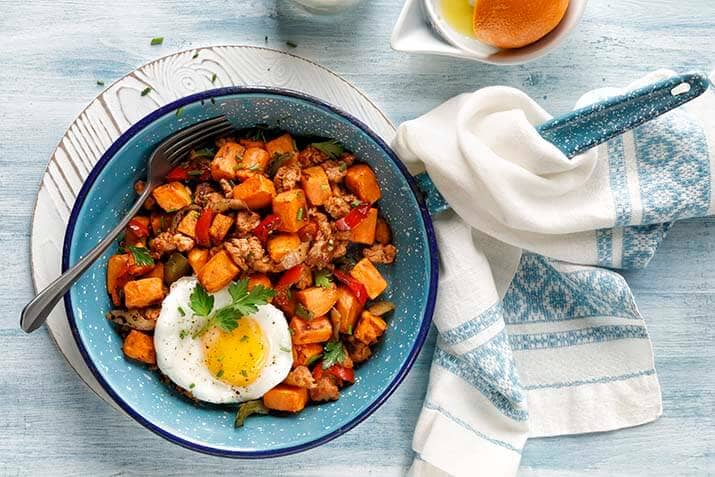 Breakfast Is Back: Are You Ready?

Going out to breakfast may seem like wishful thinking after so many months of pandemic restrictions. But with a little luck, one of the most profitable dayparts may be back in play soon. Now is the time to think about how you’re going to approach this important opportunity. Your customers will be glad you did! 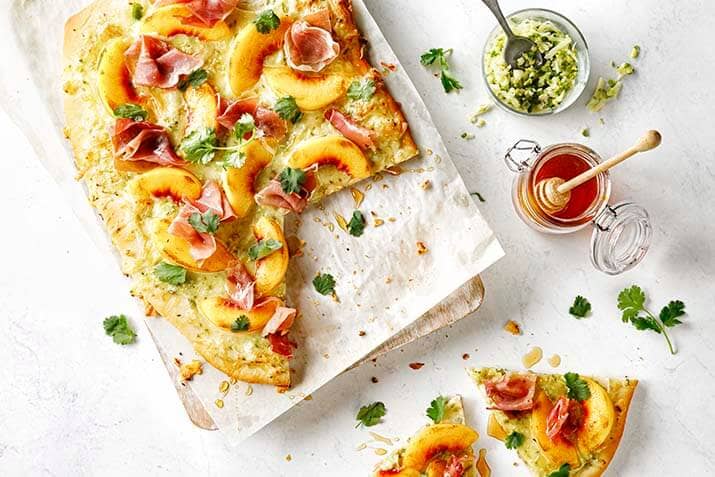 As we head into spring and summer, customer interest in fresh, healthy foods is going to pick up again. But with the pandemic, it’s been really hard to forecast sales and plan product ordering around that. Putting items on the menu that are creative, fresh, healthy, and high quality doesn’t mean you have to head to the farmer’s market to buy produce that will go bad if you don’t use it in a couple days. 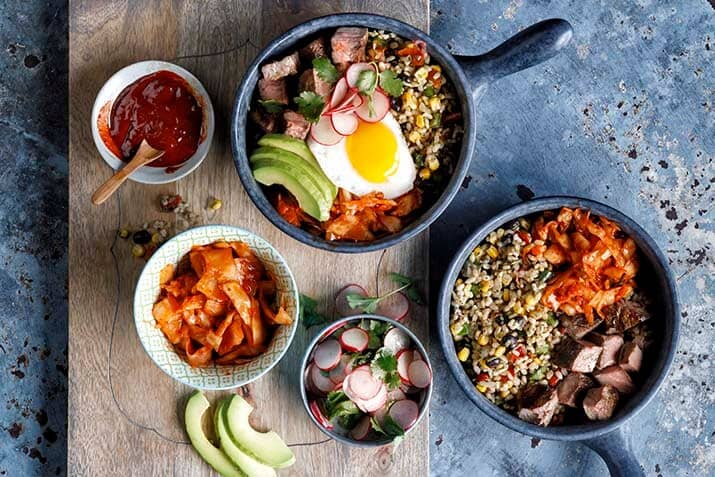 The New Fusion: Meet the "Odd" Couplings from Around the World

Mexican-Korean food? Chinese-Peruvian dishes? Welcome to the magnificent mashups of New Fusion cuisine, where good ideas and great flavors from around the world take your palate places you never thought it would go. And happily so.